This week’s find: The Gathering by Milt and Mary Rodriguez

About the book: Milt Very rarely do I read a fictional novel. Because I had read a number of Milt Rodriguez’s books I decided that I would take the opportunity to read his and his wife’s new book “The Gathering.” I absolutely loved it! I could not put it down!

The Gathering is about people looking for more of Christ than what they are finding in the institutional church building, a desire to be a part of fulfilling the eternal purpose of God. The characters have been given a heart to know the Lord Jesus Christ deeper, in an experiential way not found in attending the varied sundry meetings with the overload of duties that focus on staying busy. This in fact is something near and dear to Milt and Mary Rodriguez’s hearts. They travel to form and visit with gatherings who desire to learn Christ, to live by His life together in a shared life in real life. Back in 2009 I had the chance to meet Milt Rodriguez and Frank Viola and heard them speak and share with the brothers and sisters. I was totally blown away; I have never been the same since. I’m not sure but the bald headed man with the red beard in The Gathering sounds kind of like Milt.

The story is based on a fictional time where a political church party, the Unified Church Movement (UCM), has put a President into the oval office of The United States. This seems to be a fictional adaptation of what might have happened if The Christian Coalition with its “stealth” tactics had done the same a couple decades ago. At times the UCM seems like the Reich Church that was controlled by the Gestapo, the Nazi secret police, known to have hunted down, tortured, and executed underground groups of Christians during the dictatorship of Adolph Hitler. In The Gathering the UCM has mediators who control all organized churches to ensure that any semblance of a move of the Holy Spirit is squashed by forcing the “pastor” to adhere to certain rules of order or the removal of the “pastor,” often by devious and unconscionable means. So the characters in the story not only are they “coming out” of this political church system but they must do so counting the cost of their lives and livelihood…

About the Author: My name is Milt Rodriguez and I came to know Jesus Christ as my Lord and Saviour in July of 1973 in Southern California. Since then, my wife, Mary, and I have been involved with numerous churches and ministries. Everything from the Jesus People movement, to the charismatic movement, denominational, non-denominational, Pentecostal, fundamental, and evangelical movements and churches.

We have served as deacons, elders, worship leaders, youth leaders, pastors, and street ministry to the wayward youth on the streets of South Orange County in California and Bellingham, Washington.

For the last 18 years or so, we having been interested and working in what some people are now calling the “house church movement”. In 1990 we moved to Northern California and started a few “house churches”. These are groups where all the believers are encouraged and taught to function as the Body of Christ in the gatherings. The meetings are very informal and casual and anyone and everyone can share what the Lord has placed on their hearts. Also, there is an emphasis on the following: the centrality of the Person of Jesus Christ, the eternal purpose of God, the church as the living expression of Jesus Christ (in all of His aspects), community (sharing our lives together), and bringing the love and good news of Christ to the world.

We have since been planting such churches throughout the country and several other countries.

We feel that this can best be done in small units that we call organic house churches. These are usually small groups of 20 or less believers. They exist to fulfill the eternal purpose of God which is the make Jesus Christ the sum of all things (Eph. 1:9,10). He is the Head, Life, and Center of the Church and we are here to flesh out that eternal purpose.

The truth about spiritual warfare 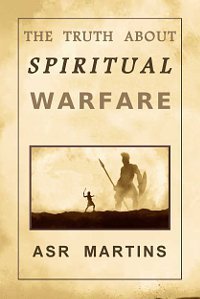 This book proves that “Spiritual warfare” is a false doctrine. The necessary Scriptures that support this statement are discussed in detail. People are actually oppressed just because they believe in this doctrine. This book will challenge your beliefs on this subject and it will set you free.

Understanding the prophetic times we live in

During the morning hours of Tuesday, June 2, 2015, the Lord Jesus Christ instructed me to write this report. He called it a “report” because He wanted me to write it as a “report of imminent events” to those who wish to understand the prophetic times we live in. The aim of this report is to bring clarity and to counter confusion in the lives of many Christians regarding the end-times, especially regarding the prophetic time we live in at this moment. The Lord’s aim with this report is clear: Clarity will equip and enable God’s children to follow His vision for and in this time period we are living in now. It will enable them to report for duty. It will enable them to become mighty instruments in God’s hand. End-time ministry does not only mean that God is at work. It also means that we have some part to play in order to enable God to carry out His plans. This report will enable God’s children to stand up and be counted”.