After these things the word of the LORD came to Abram in a vision, saying, “Do not fear, Abram, I am a shield to you; Your reward shall be very great”

“Amid disquieting thoughts from the visions of the night, When deep sleep falls on men,

God spoke to Israel in visions of the night and said, “Jacob, Jacob” And he said, “Here I am”

Now it happened at the end of two full years that Pharaoh had a dream, and behold, he was standing by the Nile.

The angel of the LORD appeared to him in a blazing fire from the midst of a bush; and he looked, and behold, the bush was burning with fire, yet the bush was not consumed.

“If there is a prophet among you, I, the Lord, make Myself known to him in a vision; I speak to him in a dream.”

“After forty years had passed, an angel appeared to him in the wilderness of mount Sinai, in the flame of a burning thorn bush.

When Gideon came, behold, a man was relating a dream to his friend. And he said, “Behold, I had a dream; a loaf of barley bread was tumbling into the camp of Midian, and it came to the tent and struck it so that it fell, and turned it upside down so that the tent lay flat”

But in the same night the word of the LORD came to Nathan, saying,

In the year of King Uzziah’s death I saw the Lord sitting on a throne, lofty and exalted, with the train of his robe filling the temple.

As I looked, behold, a storm wind was coming from the north, a great cloud with fire flashing forth continually and a bright light around it, and in its midst something like glowing metal in the midst of the fire.

And the Spirit lifted me up and brought me in a vision by the Spirit of God to the exiles in Chaldea so the vision that I had seen left me.

The hand of the LORD was upon me, and He brought me out by the Spirit of the LORD and set me down in the middle of the valley; and it was full of bones.

“However, there is a God in heaven who reveals mysteries, and He has made known to King Nebuchadnezzar what will take place in the latter days This was your dream and the visions in your mind while on your bed.

I saw a dream and it made me fearful; and these fantasies as I lay on my bed and the visions in my mind kept alarming me.

Then the mystery was revealed to Daniel in a night vision. Then Daniel blessed the God of heaven;

Thus the Lord GOD showed me, and behold, there was a basket of summer fruit.

I saw the Lord standing beside the altar, and He said, “Smite the capitals so that the thresholds will shake, And break them on the heads of them all! Then I will slay the rest of them with the sword; They will not have a fugitive who will flee, Or a refugee who will escape.

I saw at night, and behold, a man was riding on a red horse, and he was standing among the myrtle trees which were in the ravine, with red, sorrel and white horses behind him.

Then he showed me Joshua the high priest standing before the angel of the LORD, and Satan standing at his right hand to accuse him.

He said to me, “What do you see?” And I said, “I see, and behold, a lamp-stand all of gold with its bowl on the top of it, and its seven lamps on it with seven spouts belonging to each of the lamps which are on the top of it;

And he said to me, “What do you see?” And I answered, “I see a flying scroll; its length is twenty cubits and its width ten cubits”

Now I lifted up my eyes again and looked, and behold, four chariots were coming forth from between the two mountains; and the mountains were bronze mountains.

And having been warned by God in a dream not to return to Herod, the magi left for their own country by another way.

Now when they had gone, behold, an angel of the Lord appeared to Joseph in a dream and said, “Get up! Take the Child and his mother and flee to Egypt, and remain there until I tell you; for Herod is going to search for the Child to destroy Him”

While he was sitting on the judgment seat, his wife sent him a message, saying, “Have nothing to do with that righteous Man; for last night I suffered greatly in a dream because of Him”

As he was traveling, it happened that he was approaching Damascus, and suddenly a light from heaven flashed around him;

A vision appeared to Paul in the night: a man of Macedonia was standing and appealing to him, and saying, “Come over to Macedonia and help us”

And the Lord said to Paul in the night by a vision, “Do not be afraid any longer, but go on speaking and do not be silent;

And I saw Him saying to me, ‘Make haste, and get out of Jerusalem quickly, because they will not accept your testimony about Me.’

“For this very night an angel of the God to whom I belong and whom I serve stood before me,

Boasting is necessary, though it is not profitable; but I will go on to visions and revelations of the Lord.

Now there was a disciple at Damascus named Ananias; and the Lord said to him in a vision, “Ananias” And he said, “Here I am, Lord”

About the ninth hour of the day he clearly saw in a vision an angel of God who had just come in and said to him, “Cornelius!”

On the next day, as they were on their way and approaching the city, Peter went up on the housetop about the sixth hour to pray.

Then I turned to see the voice that was speaking with me. And having turned I saw seven golden lamp-stands;

God really does speak through symbols to people. Human beings were created with all the abilities and all the tools that they need to understand dreams and visions. created that way. We do not grasp the abstract so well. We want to see pictures. That is the reason why Jesus spoke and taught by means of parables. Have you ever heard someone asking, “Don’t you understand? Must I draw you a picture?” God will never stop speaking to us this way. At least not until “when that which is perfect is come, then that which is in part shall be done away.”

A very important Scripture to confirm that God speaks to us through dreams and visions is Joel 2:28-29 and Acts 2:14-18.

And it shall come to pass afterward, that I will pour out my spirit upon all flesh; and your sons and your daughters shall prophesy, your old men shall dream dreams, your young men shall see visions: And also upon the servants and upon the handmaids in those days will I pour out my spirit.

14 But Peter, standing up with the eleven, lifted up his voice, and said unto them, Ye men of Judaea, and all ye that dwell at Jerusalem, be this known unto you, and hearken to my words:

15 For these are not drunken, as ye suppose, seeing it is but the third hour of the day.

16 But this is that which was spoken by the prophet Joel;

17 And it shall come to pass in the last days, saith God, I will pour out of my Spirit upon all flesh: and your sons and your daughters shall prophesy, and your young men shall see visions, and your old men shall dream dreams:

18 And on my servants and on my handmaidens I will pour out in those days of my Spirit; and they shall prophesy. 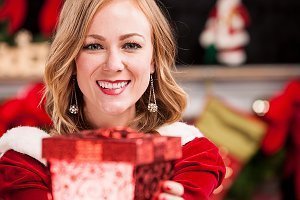